Although high school sports has been put on hold due to the coronavirus pandemic, the Culver City varsity football team, girls soccer team and boys soccer team placed eight players on the All-CIF fall and winter teams, an announcement last week by the CIF Southern Section office revealed.

Making the All-CIF teams is a prestigious honor that not only recognizes the individual accomplishments of the players, it also usually signifies that the team they played for was also successful.

The girls’ soccer player in Division 2 is senior goalkeeper Cara Conroy. The boys’ soccer players in Division 4 are senior midfielder Curtis Collazos and sophomore forward Gabriel Mejia. Mejia was one of the few sophomores named to the All-CIF team.

Players, coaches, athletic directors and the overall team work hard to make dreams come true.  “It’s definitely a reminder of how much talent we had on the 2019 team,” said head varsity football coach Jahmal Wright.

With uncertainty surrounding the future of high school sports and life in general Wright is still excited about the return of star quarterback Eckhaus. “It’s definitely a security blanket as coach to have one of the best quarterbacks in the nation on your side,” said Wright.

Not only is Eckhaus a great player, he is also a great leader. “We had a couple of leaders on the team but Zevi earned the right and the respect of his fellow players to lead our team along with some other senior leaders.”

Miller played both ways, recording three interceptions as a defensive back while breaking the school record with 81 receptions in one season. He caught 19 passes in one game against Palos Verdes, and he set school records with 1,521 yards and 24 touchdowns for one season.

Williams made 155 tackles from his linebacker position which led the team, and he averaged 11.9 tackles per game with 16 tackles for loss to go along with seven sacks.

Crump had 59 tackles and 42 of them were solo tackles. He also had three interceptions and one fumble recovery.

In soccer, Collazos scored 13 goals in just 12 games on 31 shots, and he had three assists. Mejia, in his first year on the varsity team scored seven goals on 18 shots on goal. Girls’ soccer goalkeeper Conroy had seven shutouts this season. 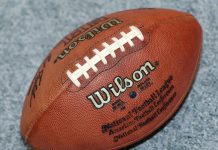 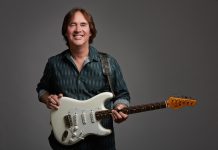 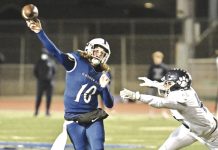