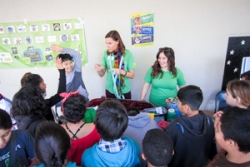 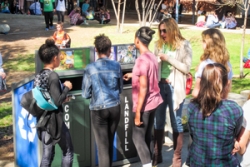 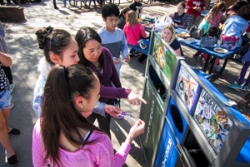 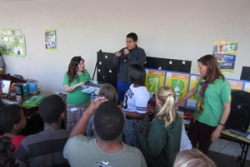 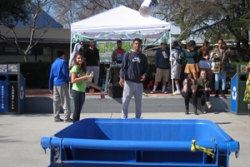 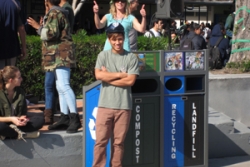 On Feb 2. Culver City High School hosted its Green5 Launch Party with students wearing green as they enjoyed music, games and other types fun. The celebration was part of the high school launching its new green program where students, staff and teachers start a new chapter in the campus’ efforts to reduce its carbon footprint.

“We created the Green 5 Program through the Environmental Sustainability Committee, which was created by CCUSD board four years ago,” Shea Cunningham said. “One of the reasons this committee was created was to help reduce the use of resources and to create saving for the school district while at the same time build awareness about the importance of environmental sustainability for the students and for the greater community.”

The Green 5 Program teaches students to Reduce waste, Reuse whatever possible, Recycle as much as possible, Ride which encourages people to be healthy and fit while reducing their carbon footprint by walking and riding bikes, and to Rethink their current actions.

“We created five simple ways that the students and the community can use to reduce their impact on environment, and we save money in the interim while creating a greater sense of health and well being for the community.” Cunningham said. “We need to rethink what we are doing because unfortunately we created this paradigm, a culture of convenience based around single use, that we want to put the brakes on. We want to encourage the kids to think about new solutions.”

Among the school’s steps to become more eco-conscious and more resourceful was the installation of new waste bins throughout CCHS with three sections: compost, recycling and landfill areas. With the three different bins, students are now encouraged and learning to sort their trash into the correct container. In addition, water-filling stations have been placed throughout the campus to refill re-usable bottles. Each bin is a different color with the green bin receiving compost, blue means recycling and black means landfill.

“We started this in the summer of 2014 here at the high school and we began the process of identifying where the bins would go,” Cunningham said. “It was a total team effort involving students, custodians, food staff, public works and the principal.”

While the efforts to create a less wasteful high school kicked off last summer, the push for a more resourceful school district began several years ago.

“Once we kind of created this idea about how we could get this message out we conducted our pilot project at Linwood Howe Elementary School. We did waste audits, pooled our money and bought recycle bins and signage,” Cunningham said. “We created a My Actions Count Survey and discovered that this really worked and that we were able to build this culture at Linwood Howe. Every classroom has two green student leaders that meet regularly and they are building this environmental stewardship at the school.”

Bringing that same approach to the high school is the new challenge but one that everyone on campus is embracing.

“We are reducing our greenhouse gases and our carbon footprint for the whole community,” Cunningham said.

In April, for Earth Month, there will be events at most schools and there will be discussions about how much carbon has been saved from the district’s solar project and by diverting the trash from the landfill.

“I am hoping that through all of the student leadership we can reduce the amount of packaging waste and come down to a zero waste school,” Cunningham said.