Music and heritage. Song and spirituality.

Some things in life seem to naturally make sense, like hands joining together in harmony.

The same could be said about Cantor Lonee Frailich and her role with Culver City’s Temple Akiba, which has been around since 1952. Cantor Frailich became the temple’s first full-time cantor in 2011.

As recent history shows, the union of Cantor and Synagogue has roots in faith, but also in good, old-fashioned networking.

Frailich is a second generation Cantor, following in the footsteps of her father, Cantor Emeritus Jay Frailich, who served as the Cantor at University Synagogue in Brentwood, Calif. for 40 years, as noted on Temple Akiba’s website.

Her musical path started early with family. She was active in her dad’s junior choir – Hasharim.

“I was lucky to have a strong Jewish foundation in my early years through my parents, my Synagogue and through Temple Emanuel Jewish Day School,” Lonee Frailich said in the American Conference of Cantors series.

She went on to serve as director of Santa Monica Hillel from 2004 to 2012 and was the assistant director at the Los Angeles Hillel Regional Center from 2007-2008. Frailich worked in a variety of capacities with the S.M.Hillel, but something was missing in her duties.

“There was no music involved in (these) positions,” Cantor Lonee confided. “As much as I loved my time at Hillel, I missed singing on a regular basis and being immersed in a musical setting.

Her father, Cantor Jay Frailich, said he saw potential early in his daughter to be a leader and teacher of song.

“I could see that Lonee had demonstrable vocal talent starting in third grade,” Cantor Jay said. “By fourth grade, I was assigning her solos in my children’s choir. By high school, I saw that she might become a Cantor.”

In the mid-2000s, Lonee had met Zachary Shapiro, who was fresh out of Rabbinic School. Shapiro found work at University Synagogue, where Frailich’s father served as the Cantor. Lonee and Shapiro struck up a friendship and stayed in contact.

When Lonee was beginning Cantorial school (at the Academy of Jewish Religion in Los Angeles), Shapiro was hired as Rabbi of Temple Akiba.

“My parents and I attended his instillation ceremony at the Temple,” Cantor Lonee recalled. “After the service, my parents went up to him and told him I had just started Cantorial school and then whispered in his ear, ‘wouldn’t it be great if you and Lonee worked together one day.’ Temple Akiba had never had a professional Cantor before me and this idea intrigued him. My parents helped set up the spark that would connect us professionally.”

A few days passed, and then Rabbi Shapiro called Lonee to ask if she would assist him at his Culver City temple.

“(Rabbi Shapiro) asked me to help put together a new kind of service and to begin tutoring students for the Bar and Bat Mitzvahs,” she remembers. “And my job continued to grow each year.”

Shapiro had found in Lonee somebody who could energize his congregants and help him broaden his programs. And she was more than up to the challenge.

“Much of our worship services up till this service was frontal,” Cantor Lonee said. “The Rabbi and choir led the services from the Bimah, with either guitar or piano accompaniment. For this new type of service, we wanted to take away the frontal element and have the congregation engaged within the music.

The initial goal of Rabbi Shapiro and Cantor Lonee was to encourage congregants to participate in the services through prayer and singing. The two thought if they created a prayer circle, that it would facilitate this engagement.

It wasn’t practical to move the chairs in the Sanctuary, so Shapiro and Frailich set up service in the Social Hall. They arranged chairs in a circle with the prayer leaders in the middle.

“We created a band with a few guitars and singers, a harp, a bongo player and myself on vocals,” Cantor Lonee said. “Almost the entire service was done through song. The service ended up being a huge success. We changed the name to our Kabbalat Shabbat service and (now) hold it once a month.”

She said they have introduced various instruments in the band throughout the years, including a flute, bass, dobroe, trumpet and percussion.

This service drew hundreds of people each month, she said. Rabbi Shapiro was beyond thrilled with his Cantor.

“Cantor Lonee’s presence stirs the souls of each and every member of our community,” the Rabbi told the News. “Her soaring voice grounds us with spirit. Her deep wisdom inspires us with wonderment. And her extraordinary presence fills us with light.

“(She) teaches people of every age, and she has gained a reputation as a master mentor to younger cantors who have trained under her,” Shapiro added.

After 10 years of Kabbalat Shabbat program, Frailich has worked to bring even more excitement into the Synagogue. The new series is “Shabbat Nefesh.”

“Last year, we decided that we wanted to showcase the talents of Jewish composers and singers,” Cantor Frailich said. “We created a new series, sponsored by a few families in our congregation, called the Flumenbaum/Jaffa Musical Guest Artist Series.”

Each month, she brought in a Jewish singer/songwriter from across the country to lead services and programs.

Frailich said the Shabbats were highly successful, drawing standing-room only crowds for the services. The congregants loved the accessibility of taking contemporary songs and setting them to liturgy.

“I wanted to educate the congregants about the rich history of Jewish music and share the new music that is being composed daily,” she said. “I wanted to bring in practices that I found important as a Cantor that had not previously been implemented at the Temple.”

Music has given Temple Akiba a special identity. Cantor Lonee has formed a junior choir to perform new Jewish music, and a Cantor’s Chanters, comprised of teens who have outgrown the junior choir. Both choirs sing at services, special programs and holidays throughout the year,” Cantor Frailich said

What would a bustling music program be without including adult singers? Not a problem, the Cantor said.

“We are so fortunate to have a thriving adult choir as well, under the wonderful leadership of Mary Lou Basaraba (renown musician and musical director),” Cantor Lonee said. “We have between 10 and 20 adults that sing once a month at our Choir services. We have even continued to include choir members in our services on Zoom.”

As music fills the Synagogue that serves the cities of Culver City and West Los Angeles, Rabbi Shapiro said his Temple Akiba has benefitted immensely by Cantor Frailich’s ideas, musical talent and leadership.

“Cantor Lonee is my true clergy partner, and I feel like the luckiest rabbi in the world that I am able to build and dream with such a wonderful person,” Rabbi Shapiro said. 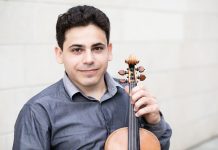