Music in Culver City might not be heard at large gatherings these days due to the coronavirus and safe-distancing order, but the quality of “virtual” sound can still be magnificent. The Aug. 20 MidDAY at Grace monthly concert is just such a case.

The online program will feature the Dyer Family, top-level musicians based in Orange County and who have ties to Culver City.

Their 45-minute program “will feature (dad) David Dyer on harpsichord, (son) Walter Dyer on cello and (mom) Kathleen Dyer on flute and piccolo,” Kathleen Dyer told the News this week. “For the final number, we will be joined by (daughter) Emily Dyer Reed, soprano, and David will perform on the family Steinway piano, which is a family heirloom from David’s grandmother.”

“At Temple Akiba on Sepulveda Boulevard in Culver City, where I have been the choir director for the past 14 years, Kathleen has been my flutist for the High Holy Days services of Rosh Hashana and Yom Kippur, and Dave and Emily have sung as Ringers with the ecumenical choir that I build each season to augment the Temple Shabbat Choir,” Basaraba said in a recent email exchange with the News.

“(We met) in 1983 and performed together when we were both in formative years as musicians at CSU Long Beach,” she said by email.

Basaraba and Kathleen are currently working on piano/flute sound  tracks for the upcoming Holy Days which, out of necessity, will be presented online.

“Historically, these annual services have been presented at the Veterans Auditorium to accommodate an expanded congregation, but, this year, will be in ZOOM and video formats,” Basaraba added.

Dr. David Dyer and Kathleen (Beld) Dyer combined talents with their first piece of music in 1981, when they performed a Telemann piano and flute sonata for the Golden Empire music festival, Kathleen Dyer recalled. Music was the foundation of their relationship and the two were married in 1989.

Kathleen said she has enjoyed a career as a professional flute and piccoloist, performing as principal piccolo player for the San Bernardino Symphony and the Long Beach Ballet Orchestra.

David Dyer, who has a legacy of professional musicians on both his maternal and paternal sides, “is a director of a Master of Science in Biotechnology at Azusa Pacific University, and enjoys opportunities to sing in church and community choir ensembles,” wife Kathleen said.

Daughter Emily Ruth (Dyer) Reed was born in 1992 and studied piano, violin and oboe before focusing completely on her vocal studies with Basaraba.

Emily, now a professional singer, has performed locally as a soloist with the California Philharmonic, New West Symphony, The Culver City Symphony, The Marina Del Rey Symphony, The Pacific Symphony, the Lyric Opera of Orange County and The Redlands Bowl Opera.

Her resume notes that she is “passionate about bringing opera and musical theater to children, and has collaborated with the Pacific Symphony in its endeavor to produce child-friendly opera performances,” Basaraba said.

This fall, Emily begins her second year on the voice faculty of Chapman University in Orange, Calif.

Son Walter was born in 1992 and studied cello, bass, drums and guitar. He too began singing in college and has performed the title role of Bob in the Menotti opera, “Old Maid and the Thief.” He has enjoyed many years in school and church orchestras, praise bands and concert choirs, and is currently pursuing a Ph.D. in Clinical Psychology at Penn State, his mother said.

Behind the camera for the Aug. 20 concert is Icelandic bass baritone, Johann Schram Reed, who is Emily’s husband.

The two met at OperaWorks and were married in 2015.

“Johann brings a lifetime of music to their union as well, having studied piano, violin and guitar before focusing fully on his opera career,” Kathleen said.

His international career has flourished in Iceland, Japan and in the U.S. at Opera Roanoke and Opera Utah.

“Johann will be creating the first Grace Church Virtual Choir video to air in the Rallye Sunday service on Sept. 20,” Basaraba told the News.

“Johann and Emily are living in Long Beach, teaching music, and recording for Johann’s company Conduit Services, and preparing for upcoming performances with Opera Neo and the Mission Opera,” Kathleen said.

The Dyers and Schram Reeds attend and perform for churches in Bellflower and Pasadena and have soloed for the Grace Church Ministry events under the direction of Basaraba.

“There is always great joy for the Dyers performing in any capacity, but as a family of faith, the most meaningful is when we are able to worship together,” Kathleen said. “In this way, we echo the words of Johann Sebastian Bach, ‘Soli deo gloria’ or ‘To God be the glory.’”

Basaraba said that all charitable donations for this concert and since April 2020 have gone to benefit the Grace Diner, a longstanding community outreach serving meals on a weekly basis for the past 10 years.

“As of mid March, 2020, the Diner has expanded with the support of Feed Culver to provide up to 1,200 meals each week, served daily Monday through Friday,” Basaraba said.

Those interested can connect with Grace Church on Facebook at https://www.facebook.com/GraceCulver. Or contact Mary Lou Basaraba for additional information on the MidDay at Grace concert series and/or how to make donations: nevadastateopera@aol.com. 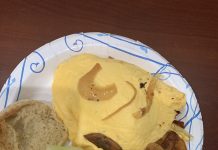