At press time (Tuesday, May 10) four Culver City High School teams were still alive in the prestigious CIF playoffs and track and field meets. The girls’ and boys’ lacrosse teams and the girls and boys track and field teams were still trying to win championships. The baseball team and softball team were eliminated from CIF competition last week and this week. The boy’s lacrosse team played their CIF semifinal game last Wednesday against Aliso Niguel on the road. Aliso Niguel came into that game with an 18-2 overall record, and they had a league record of 9-0. Culver City was 12-7 and 7-0. To reach the semifinals the Centaurs beat Redondo Union 11-10 last Friday and they outlasted Saugus 8-5 last Monday. Both games were played at Culver City and in both games the Centaurs had to come from behind to win the contest. The girl’s lacrosse team plays their semifinal game today (Thursday) against a familiar foe, Mira Costa on the road at 5 p.m. Centaurs come into the game with a 15-4 record while the while the Mustangs are 18-6. Mira Costa beat Culver City on March 16, at Mira Costa 12-4. To reach the semifinal game the Centaurs beat Murrieta Valley 17-9 last Saturday and they beat Rosary Academy 17-3 last Monday. Both of those games were played at Culver City. The track teams are headed to the CIF Finals on Saturday at Moorpark high school. Qualifying for the girl’s team are dynamic duo of sprinters Joelle Trepagnier and Morgan Maddox. Both girls will run the 200 and 400 meters and the 4X100 and the 4X400 meter relays. Running on the 4X100 with them are Anrea Smith and Iamaan Minwalla and joining them on the 4X400 will be Kennady Iverson and Savanna Mullins. The boys track team will be represented by Zaire Waring. Waring will try to defend his 400 meter title and he will also be trying to win the 200 meter crown on Saturday. Waring will also be running on the 4X400 meter relay with teammates Jerin Stanton, Dontay Mayrant and Duane Mayrant. The boys’ lacrosse team will be trying to advance to their second straight CIF final game if they win on Wednesday against Aliso Niguel. Against Redondo Union last Friday the Centaurs mounted a furious comeback which pleased head coach Casey Chabola. “It feels great,” said Chabola after the win. “They really played together in the second half. They definitely were playing for each other. This team plays together. It’s a testament to the players and lot of them have been around for a long time playing together. It’s just wonderful to see.” One of the players that has been around for a long time is the coach’s son Joey. Joey was all smiles after the victory over South Bay rival Redondo Union. “We played them earlier in the season and we lost by one,” he said. “This time we were down again but we played with a lot of heart, and we just finished it off.” Joey Chabola comes from an athletic family and that has put in position to succeed. “It’s great getting to where I am and getting the accolades. It makes me really excited, and I am glad I can play well. I trust my teammates and coaches and go from there.” Also playing well is the girls lacrosse team. They also hope to make it to the CIF final after two playoff wins. “I was very happy we got everyone in, and they experienced a CIF playoff game which is an awesome feeling,” said fourth year head coach Emily Rodgers after their win last Saturday. Rodgers like Chabola is building a strong lacrosse program. “We did that by getting everyone on board. Everyone is on the same page, and they are motivated. Everyone wants the same outcome. We are lucky that we have a lot of talent on our team. There’s not a person that we don’t want to have the ball. We trust everyone on the field and the people on our bench. I am just excited about the team we have.” Rodgers, who played college lacrosse and hockey is impressed with the Culver City lacrosse community. “The parents are super involved, and the kids are really awesome and motivated on the field and off the field,” he said. “We have a great group of kids here. My job honestly has been pretty easy. They do the work for me. It’s an outstanding community here. 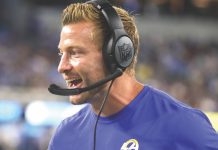