We all agree that it’s time for a second title, and it appears that the 2018 version of the Centaur Football Squad is poised to do just that. Great win over Santa Monica, I do believe that you “earned their respect.”

Lastly, thank you to those that put in a great effort to locate our

Taxpayers should pay attention to new budget for Culver City 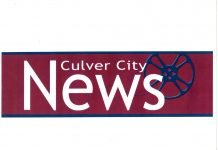 Does Culver City have a $14 Million Information Highway to Nowhere?