A great run into the CIF boy’s division 4 soccer playoffs has ended the Culver City boys’ soccer season in the CIF playoff semi-final game courtesy of Bellflower High School.  The team lost a heartbreaker 2-1 on a corner kick in the waning seconds of added time, thus ending their season on Bellflower’s home turf.

The Centaurs have not been past the second round in 21 years, so making it to the semifinals this year was truly a monumental accomplishment for the squad, which will now say goodbye to 10 seniors.  However, the team and coaching staff are moving into next season with high hopes of achieving even greater accomplishments the next time they enter the playoffs in 2021.

The game was literally a tale of two halves.  Culver City had the early momentum and dominated possession at the outset of the game, but the match shifted to Bellflower’s favor after the first fifteen minutes. The home team was finally rewarded in the last 20 minutes of the first half with a well-placed header on a set piece that just squeaked by the Centaurs’ goalie. Culver City entered the second half down 1-0, but the team and its robust group of supporters knew they had what was necessary to change the final outcome of the match.

The second half momentum swung right back to Culver City’s favor, and they were on the attack from the onset.  Multiple opportunities presented themselves, and it seemed evident the visitors would even the score which they did midway through the second half after a handball was accurately called in the box against Bellflower and senior Curtis Collazo’s converted the penalty kick making the score 1-1.

The ball and the momentum continued to stay in the Centaurs favor through the half and the game seemed destined for extra time and possibly penalty kicks.

In a cruel twist of fate, the Buccaneers earned a corner kick as time was running out and converted on yet another header to the near post leaving the Centaur players and fans stunned as the final whistle blew and the season was officially over.

“I am super proud of these boys”, said head coach Mike Castillo adding, “They battled all season and even when we were down 0-1 tonight, they fought their way back into the game and made it one we could have easily won.  We got knocked out on two set pieces, two headers which is how soccer can be, a game of inches.”

“We had an amazing group of seniors who set the bar high for us next season but luckily our juniors and sophomores are talented and eager to build on the success we had this season”.

Next year, Culver City plans on being one step closer to controlling their destiny when their final bell is rung. 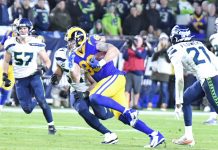