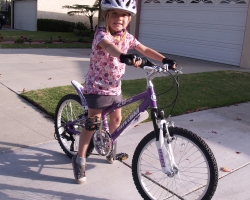 – Presented by Howard Cohen, for the CCBC

If you ride or walk on the Ballona Creek Bike Path or across the pedestrian bridge on your way to Farragut Elementary School or Culver City Middle School and Culver City High School, you are probably aware that the path has been closed between the bridge and Overland for many weeks. Undaunted, cyclists and pedestrians traveling east or west on the path have been detoured through the Lindbergh Park neighborhood while waiting for the barriers to come down.The wait is nearly over now – the new and improved bike path will reopen in about a month.

The Culver City Department of Public Works has been renovating this section of the path – making it more attractive, eco-friendly and safer for both cyclists and pedestrians.

Artist Alber De Matteis was hired to design and build a beautiful new wrought-iron gate at the Overland entrance near the library. The Gunite that covered the slope leading from the path up to the school grounds has been removed, replaced with a landscape of California-native drought-tolerant plants. There is a newly installed drainage system that flows through a bioswale to reduce and filter runoff.

The path will also be safer and more pleasant for pedestrians. Alongside the pavement used by cyclists there’ll be a decomposed-granite walking path. New fencing and a concrete header will run along the edge of the path.

Security will be enhanced, with additional lighting, a security call box, and an elevated security camera providing coverage for the path and the bridge. A Public Works crew will continue to render graffiti removal services seven days a week.

Charles Herbertson, the director of the Department of Public Works, said that the project was a long time in the making. After receiving a generous grant from the Santa Monica Mountains Conservancy for the project’s design phase, the department held public workshops in Lindbergh Park and received a great deal of community input. But then the project sat dormant for about four years for lack of funding, until the city received federal stimulus money and competitive grant money and construction could finally begin. The department coordinated the project with the Culver City School District, the County of Los Angeles Public Library, and others.

While praising other improvement projects on the bike path, particularly the city of Los Angeles’ project at Centinela,Mr. Herbertson called this new section “the most significant project that anybody’s done on Ballona Creek to this point.” He said he hopes that this will serve as a “catalyst project,” showcasing the creek’s riparian possibilities.

Now that the City has adopted its Bicycle and Pedestrian Master Plan, Mr. Herbertson hopes for more grants for other innovative bicycling- and pedestrian-oriented projects. He expects that Culver City will ensure that future development projects incorporate facilities for cyclists, in accordance with the Master Plan.

As for this project, the new gate still has to be adjusted, the repaving has yet to be finished, and the irrigation system requires tweaking. But once construction is completed, Herbertson said he is hoping for a weekend grand opening, perhaps in late March. The Culver City Bicycle Coalition will join the festivities with a family bicycle ride along the path. Check the Web site for announcements as the time draws nearer. Safe and happy cycling until then.

Bike Safe, Bike Smart! is a new weekly column to promote responsible cycling by providing information, education and advice about riding. It’s written by members of the Culver City Bicycle Coalition (CCBC), a local chapter of the Los Angeles County Bicycle Coalition. Join them for their family bike ride, the last Sunday of every month. For more information and to submit your questions, write ccbicyclecoalition@gmail.com, and visit their blog culvercitybc.wordpress.com/.

It is never too late to get back on track