Recent grad Princeton (Chris Kauffman), full of hopes and dreams, moves into the Avenue Q apartments to start his life in the Big City, but what he doesn’t know is that he will soon be overwhelmed with one desire: to discover his true purpose in life.

Throwing away his love for the perfect woman, he starts on this journey only to discover that it may never end. An adult-only comedy-musical, “Avenue Q” features perverted characters, talented vocalists and delicious satire.

Ranging from sentimental ballads to catchy pop songs, the music sports a live band that complements the talent and direction. Undoubtedly adult-themed in content, the lyrics form a satirical message on modern-day American society.

Particularly poignant are “Everyone’s a Little Bit Racist” and “Schadenfreude” (which loosely translates to “relishing in the misery of others” or “epicaricacy.”) Each expressing their malcontent with the world (see lyrics for “It Sucks to Be Me”), the songs portray a negative view of the world, albeit one with an unceasing optimism.

From puppets to movie stars, the characters are a hoot. Gary Coleman (Benai Boyd) excels as the superintendant, aware of his limited successes after Diff’rent Strokes.

Failed comedian Brian (Chris Kerrigan) weds Christmas Day (Janelle Dote), a blunt social worker with only one client. Flawed with failure, the over-the-top personalities cause blunders and start downward spirals that only add to the play’s comedy.

A common theme eventually emerges with rampant misfortune at the root. All in all, “Avenue Q” becomes the embodiment of Schadenfreude.

The actors’ vocal range is nothing short of stunning. Sounding much like the Sesame Street’s Cookie Monster and, at times, Ernie, Market Whitten provides much of the audience’s laughs in the form of physical and verbal comedy.

Serving up most of the ballads is Danielle Judovits. Her vocal capabilities are unmatched by the rest of the cast. A true Broadway star, Judovits hits the high notes with such ease that Pavarotti would look twice to witness her raw vocal power.

Although Judovits is the true star, other cast members do hold their own vocally, mainly Dote and Kauffman.

Although Princeton does not discover his actual purpose, the ride on which he takes the audience is fun, quirky and unprecedented. It’s honestly no wonder why “Avenue Q” has received several Tonys: it’s just that darn good.

Playing at the Met Theater, Doma Theater Company’s “Avenue Q” will continue its run until Feb. 3. Tickets range from $30 to $35, and the theater is located at 1098 N. Oxford Ave. in Los Angeles.

Natalia Evdokimova has been involved with theater throughout her life and has reviewed theatrical productions for local and citywide publications since 2005.

You can be a ‘Citizen Detective’ virtually at Geffen Playhouse 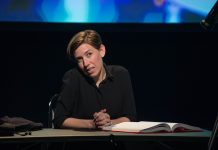